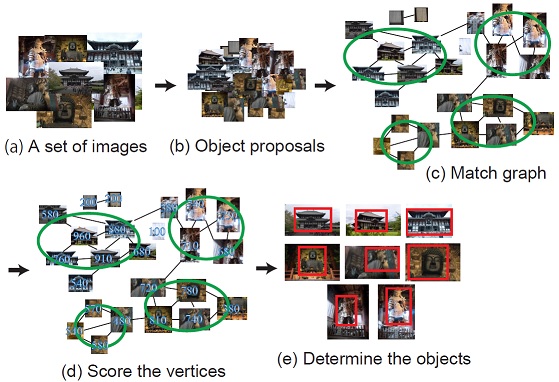 Although the unsupervised discovery and localization of common objects from within a set of images has received considerable attention, the difficulty of this task means that current methods are not sufficiently accurate. This paper describes an unsupervised method that more accurately discovers and localizes common particular objects within a set of images. First, our method constructs a match graph that precisely represents the relationship among particular object proposals extracted from images. The match graph necessarily contains communities, i.e., subgraphs where object proposals with identical subjects are densely connected by edges, indicating matches between local image features in the proposals. Our method determines the common particular objects by scoring the object proposals using a novel node centrality measure for graphs with a community structure, which we call the restrained random-walk centrality. Experiments demonstrate that our method is considerably more accurate than previous approaches on a particular object image set.